Size matters? Well it matters for girls as well as for boys. That I what the society thinks. Does it really??? Actually it is that half the world is behind the SLIM SIZE thingy. Girls want to achieve it because the guys want them to. This world is a very twisted place to live in. and trust me if you go to follow the world or do what the world wants you to – you will end up being a PSYCHO! You will lose your mind and eventually will end up being nothing less than NO ONE! Rather than being NO ONE be SOME ONE. Be the one of who you will be proud of yourself. Be the one who you look in the mirror, smile and say “Yes I am so proud of you.” The world/society will chase after you and some of them will be in your way as obstacles. All you need to do is take your flying broom and fly over all these obstacles. These obstacles are very low when compared to you, so don’t worry. 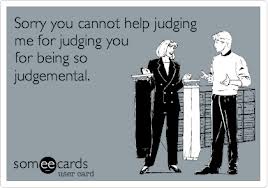 Men and women who are being a victim of the disease called SOCIETY also have to remember that we make society and it is we who judge others and so does others. To make this world a little livable (though with the politicians and crime all over, the world is not a place for normal people to survive) we need to work hard by not judging others.

1. Just because the man sitting next to you has a girly way of talking and a girly body language doesn’t mean he is GAY.

2. The girl who is blabbering about her boyfriend doesn’t necessarily be LUCKY.

3. The person who has muscles better than that of John Abraham or Salman Khan or any other Bollywood/Hollywood Chap doesn’t necessarily be taking pills.

4. The person who is always smiling doesn’t have to be the HAPPIEST one.

5. The person who is sad always need not be SAD at home.

6. The person whose eyes are RED isn’t HIGH.

7. The girl who wears RED LIPSTICK isn’t a SLUT.

8. The boy who reaches work early need not be the highest SCORER.

9. The girl who is dieting isn’t INSECURE.

Most of us have this tendency of judging people, not because we are made in this way, it is because we want to judge them. We have grown up in the SOCIETY that says, “Love happens once” so if there is a GIRL who falls in love AGAIN, she’s a WHORE, but if a MAN falls in love AGAIN; his first love was a WHORE to leave him. I might be rude in by posts about men and one might even call me a Feminist and I would take the title with pride and would wear it as a crown. Yeah maybe I am a Feminist. I do not accept the fact that this world is ruled by men. No it is not. I had once asked in school, Why do the ECONOMICS subject has the ‘HIM, HE, HIS, MAN’ while describing PEOPLE? My teacher then said, “Please ask questions from the syllabus.” The entire class laughed and I felt weird because, my dad always told me that PEOPLE meant Men and Women.

The world is indeed a Male Dominating Society as they say because even now when we have to say ‘PEOPLE’ we say ‘Man’ why can’t it be universally used as ‘Woman’?

Personally, I use the words as men and Women when I want to say People.

Ah! so the topic has diverted from something to something else as usual. Anyway I hope the message is confused as that is what Chaotic Soul is all about! Chaos! Doesn’t little chaos make our life a little more beautiful…?

Ashmita Chatterjee is a Creative Writer/Blogger from Mumbai. She is an Enthusiast, Straight Forward girl who has found joy in Writing Blogs. Ashmita is a Loud Creator of Amazing Blogs, Short Stories and Erotica at Chaoticsoulzzz! She started her blog in 2011. When Ashmita is not being very busy, she can be found Writing, Reading, Eating, or Recklessly Travelling with her loved ones. She is known by the name of @chaoticsoulzzz on her Twitter and Instagram. View more posts