Sunday night was my un-official gataari. I am sure my Mumbaikar friends and many Indian friends would know the meaning of gataari but many of my readers would be unaware of it. Well there is a Hindu month which usually falls in the month of July, this month is known as the shraavan month. It’s an auspicious month for Hindus. People avoid all kinds of EVIL things for THIS one month. When I asked my mom the definition of EVIL things she said – Alcohol, cigarettes, Sex and Non-Vegetarian food. “NON-VEG!”, that was my re-action the first time I knew what is the definition of EVIL in the month of SHRAAVAN. As a child and even as a teenager I never fasted for Shraavan. Even after hours of persuasion by my maashi’s (maternal aunts) and my mom I was stubborn enough like my paternal family members that I won’t keep such months where I have to sacrifice non-veg. Who sacrifices non-veg for a month?

Dumb People do that. I am one of those dumb people now. This year I have decided to keep Shraavan month. Not because I am a Shiva lover (I am indeed a BIG Shiva LOVER) but the reason I am following this one month without all the EVILS is because my best friend did it last year and she keeps bragging about how lovely her skin had become after avoiding non-veg for one whole month.  So I have decided to follow the Shraavan Month with full dedication.

I am going to give up non-veg and alcohol for one whole month or maybe two this year as the Maharashtrians say there is something known as an ‘Adhiik Maas’ (Extra month), according to which the shraavan fast would go up to the Ganesh Chaturthi. I know it sounds a lot – TWO MONTHS without non-veg is like a big deal but some things can be followed for self-happiness. This is also a good way to test and see if I can live without non-veg if the situations demands for it.

Getting back to the topic – GATAARI is nothing but a small or rather a huge celebration and consummation of all the EVIL things before the Shraavan. People get drunk and eat non-veg to the core during Gataari. Gataari is usually celebrated a day before Shraavan’s first day but as and when time passed by people have changed the norms. So now-a-days, Gataari is celebrated on the weekend or SUNDAY before the Shraavan month, as people can’t get leaves before shraavan (if it falls on a weekend). So my un-official and Official Gataari was on Sunday.

I am not used to going to Beer shops to buy alcohol. It’s always my guy friends or cousins who have purchased the beer for me. This was my first experience in buying beer. Trust me, it took me one hour to buy just two tins of beers from a shop which is hardly 10 minutes from my place. I went to Shop # 1 and took 5 rounds outside it and finally didn’t get the courage to enter, so I took a rickshaw and strolled for 15 more minutes outside the Shop # 2. I didn’t have the courage and was sweating profusely. I was mugging up my dialogue to say it to the beer shop uncle. I couldn’t enter this shop too. so I took another rickshaw and stopped at Shop # 3.  Same story, that I am not going to repeat. Finally I saw on my mobile Facebook chat that Navin was online and finally I thought I would have someone to boost me up and encourage me and help me get into a beer shop for my Gataari. Alas! Navin actually de-motivated me to hell and literally asked me to go back home because I won’t be able to buy beer for myself. I am not sure but I think he was trying some Reverse Psychology on me so that I can get over this fear of entering a beer shop. So finally Shop # 4 was a Success and I entered the shop thinking: ‘Shit! This uncle must be thinking I am some BAD girl who wants to buy beers. But mita, you are buying beer for yourself and how does it matter what does he think?’ I entered and was shocked to see the uncle’s reaction. The uncle wanted to get over my order ASAP so that I can go out of his shop. He was stunned to see me there. He packed my 2 beers in less than 5 minutes, took the cash from me, gave mem the bill and waved me a goodbye. 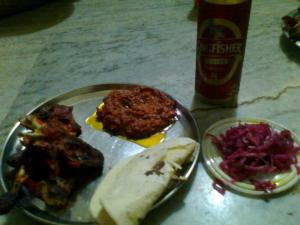 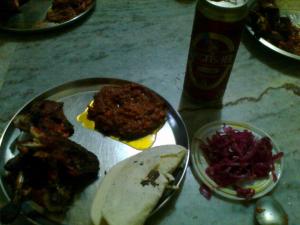 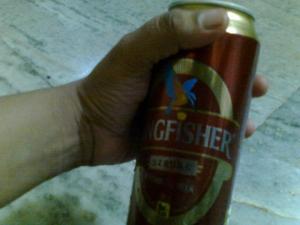 The moment I left the shop with the beers in my hand I felt this weird happiness and a feeling of achievement. So this was the major part of my gataari. My mom and my Bhai weren’t a part of my gataari because they are not going to sacrifice non-veg for a month. So the moment I reached home I told this entire Beer Shop story to my ma and Bhai,  and then when I realized how least bothered they are I decided to order the food. Obviously I had to order Chicken Tandoori, because that happens to be my favorite and also Butter chicken. So it was the menu along with some tandoori rotis. My gataari was very well spent with me one extra thing – THE BEER. My mom and Bhai looked at me as if I was drunk, and also Navin thought I am drunk (he wasn’t there at my place but was there online). PEOPLE I don’t get drunk in 2 damn beers. I have got a capacity more than that. I don’t think it’s a very good thing and any prospective guy reading this would reject me for this and my mom would kill me for publishing this on World Wide Web, but who cares! A guy who rejects me for my 6 monthly Beer drinking habits he better go back home because he doesn’t deserve me.

So anyway this was my gataari spent all by myself with staring family members and a taunting friend (Navin), otherwise a well spent Gataari.

I know I haven’t written any of the make-up reviews yet, its just that I use them in a hush-hush to work and that’s not the best time to click pictures and in the morning after I come home, I am too tired to sit and apply make-up, as it is my mom thinks I have gone crazy because I do tons of things on me before going to sleep – you know the make-up removals, night moisturizer, hair oil, and body lotions. She often tells me “sapney me SRK nahi aane wala aur naahi tera Koi boyfriend aane wala hai, jot u itna ready hoke so rahi hai. PAGAL LADKI! Go to sleep and close your eyes and keep that useless mobile of yours!” hmmm don’t think that my mom is too strict, she isn’t – this happens to be her daily dialogue. Ignore it, I do…

So its time to sleep and yeah also in the month of shraavan I can’t fantasize about my GUYS or Gerard Butler, Ashton Kutcher or anyone else. Alas! They all would miss me desperately but Jai Shiv Shankar!

Ashmita Chatterjee is a Creative Writer/Blogger from Mumbai. She is an Enthusiast, Straight Forward girl who has found joy in Writing Blogs. Ashmita is a Loud Creator of Amazing Blogs, Short Stories and Erotica at Chaoticsoulzzz! She started her blog in 2011. When Ashmita is not being very busy, she can be found Writing, Reading, Eating, or Recklessly Travelling with her loved ones. She is known by the name of @chaoticsoulzzz on her Twitter and Instagram. View more posts

3 thoughts on “The Much Awaited Gataari”