It’s become a trend for guys to misunderstand girls. When a girl says that she wants to be friends, it is SIMPLY FRIENDS and there are no hidden words in it like FRIENDS ‘with benefits’. Is it all the guys in the world who would consider a girl as a girlfriend, lover, and intimacy partner? Or there are some guys who would actually think and believe that girls and boys can be friends.

Last night a guy told me during the normal SMS chat, ‘if you cannot be my girlfriend, you can’t be my friends, because two people of opposite sex can’t be friends ever.’ I was shocked by this because I have got boyfriends with no feelings of LOVE or LUST for them – they are just friends. Anyway, this has become a trend and I would to some extent blame movies and daily soaps for it, where they show most of the time that every girl and guy friends eventually have feelings for each other and then happily ever after. In reality this doesn’t work. Usually guys don’t make the good-looking, skinny girls their friends. I have noticed this, most of the time.

A best friend for a guy is the geek, fat chashmish girl from the school or college. Even at work, guys and girls are good friends when either of them is the nerdy types. I am not the hour glass figured girl and never was. In school I was one of those chashmish, fat and geek girl who was being noticed only when there was a school project because I was full of creative ideas. As and when I grew, I started carrying myself in a much better way with the same fat body. I grew older and started my fats started going to the right places. And today, I can claim that I am good enough to get any guy. But in all these things what I lost along with my weight (not much but little) is my best friend. When I was fat and geeky in school, he was my friend. When I went to college and became outgoing and used to hang out with the guys, he became my best friend. When I went to my graduating year and then work and lost a lot of weight as compared to school, he started having the hots for me that a guy usually has for his girl friend. We flirted, but that was all a friendly gesture for me and by the time I told him about my feelings for my guy, he said he would never talk to me because he ‘loves’ me (it should actually be LUST). I thought it’s fair enough to let him be and move on in life.

The point is not about a guy being intimate for a girl, its natural but thinking of intimacy for a friend who was earlier just a friend because she was fat and now you have feelings for her because she is curvy, doesn’t make sense, does it? 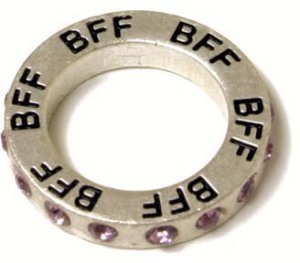 I might be wrong, but I still believe that two people of the opposite sex can be friends. Getting intimate feelings for a guy is a normal tendency in girls of my age and it is normal too… but guys need to understand that a girl can’t get intimate or have intimate feelings for more than one guy at a time, unless it is one of those super-star imaginary boyfriends you have.

Did I just change my topic again? Ah well I guess I did! Who cares! In the end just want to say that a guy and a girl can be friends too. Though let me clear that there are some guy friends on whom I have a crush on but again I don’t Lust them, I just like them.

7 thoughts on “Just a FRIEND”