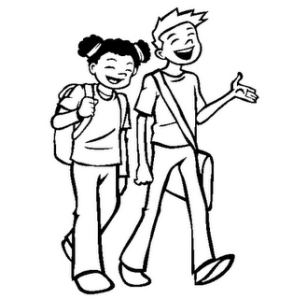 Well many of us might have that best friend who is of the opposite sex… many people say BOYS AND GIRLS CAN’T BE JUST FRIEDNS!!! Maybe some are true, but when I say some are true which apparently means, some are wrong as well… I strongly believe that a girl and a boy can be best of friends as well… not necessary that all the opposite sex friendship means RELATIONSHIP or AFFAIR OR LOVE OR WHATEVER!!! At times it might lead to love but friendship can be pure friendship as well… people need to understand the fact that a girl and a boy can be very good friends… I have many guy friends rather most of my friends are guy and fortunately or unfortunately I don’t love any of them as a lover but I love all of them as friends!!!

I love to hang out with my guy friends because there are no gossips, no bitching around, no talking about makeup and dresses and pathetic things… rather just FUN!!! It’s always better to be in a gang of boys rather than be in a group of girls… it depends from perception to perception as well, maybe the girl sitting next to me in the train would hate being with a gang of boys as they talk senseless things at times… to be very frank being with a gang of boys means be ready for all the comments on girls and other abuses… but being the only girl in a group of guys means being the darling of all… to be frank my guy friends keep like a darling, they make fun of me, they hit me hard when I try to flirt with some guy and then say, “you are not good In this… let it be… have PEPSI” and then start laughing… they at times forget that I am girl and then comment something that they shouldn’t in front of a girl but then they just ignore me and don’t even say a sorry for saying that thing!!! But guy friends are really very sweet… at least for me!!! And yeah I still believe girls and guys can not only be JUST FRIENDS but also BEST OF FRIENDS!!!